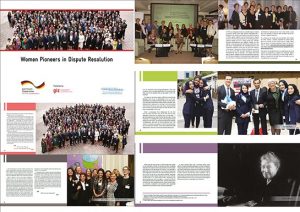 “Women Pioneers in Dispute Resolution” is a book showcasing the stories of a number of women in the field. The book is part of the project entitled “Gender Oriented implementation of the ADR instruments in the Western Balkan”, which is financed by the German Federal Ministry for Economic Cooperation and Development and implemented by Deutsche Gesellschaft für Internationale Zusammenarbeit (GIZ) GmbH, Open Regional Fund for South East Europe – Legal Reform (ORF LR). The project’s goal is to support the promotion of alternative dispute settlement mechanisms (Arbitration and Mediation) in the Western Balkans, especially by encouraging the participation of female practitioners.

Sharing successes and documenting them is a way to promote women’s contribution to dispute resolution. Sometimes young people need inspiration in order to choose their career path and such inspiration may be found in real success stories. GIZ ORF-LR and ArbitralWomen therefore collaborated to gather different stories from all parts of the globe in this publication.

The book is a small piece of the overall puzzle about how to promote women in dispute resolution. It reports on prejudices, societal structures, and missing networks, all of which women face every day. By analysing individual careers, opportunities and reporting on challenges from the daily lives of women working in arbitration, the obstacles become apparent.

It is a collection of stories by women for everyone, resulting in a colourful mosaic showing that equality still has not been fully reached, but also showing that women can do it and have done it — very often together with men! Facing challenges, prejudices, judgments, closed or missing networks, cultural barriers etc., those women succeed by working hard, desiring more, believing in people and themselves, never giving up, having passion and by daring.

Thank you to all who contributed, and shared their stories with us! Time has not permitted us to approach other reputed women pioneers, and some who were approached could not contribute due to their agendas.