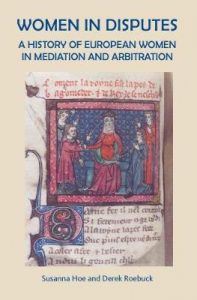 Finally, a book on the history of women in Malta has been written, and it is much more than a compendium of famous names.

‘The value of Roebuck’s series of historical studies in dispute resolution as a readable, reliable, comprehensive, concise and insightful resource simply cannot be overstated.’

From Homer to Jane Austen, storytellers have entertained their audiences with tales of women in disputes, as parties and peacemakers. This is our attempt to write their history, relying as far as possible on primary sources, documents which have survived by chance, never intended for our eyes by those who created and preserved them.

In 534AD, the Roman emperor Justinian expressly forbade women to act as arbitrators. In the thirteenth century Saint Thomas Aquinas stated that ‘woman is naturally subject to man, because in man the discretion of reason predominates’.

Many have assumed that what was laid down as law or proclaimed as authority represented the reality. But women do not always do what men tell them they should. We have set out to find what has happened in practice over 4,000 years, at least in Europe, beginning in the Bible and Ancient Greece and Rome, but thereafter concentrating on England, with regular references to the Continent.

A chapter on Anglo-Saxon England shows the inextricable ties with the Continent among women of the highest rank, as do two of the four that follow on the Middle Ages. Those women often mediated and arbitrated, but they also resolved disputes by a number of other ways. Then we show how common it was for titled women in England to resolve disputes. A chapter on ‘untitled women’ provides plenty of evidence of the regular resolution of their disputes. There is a digression then to Malta, to the records of a fifteenth-century notary, which tell the stories of women of every station and their disputes.

England’s greatest monarch, Elizabeth I, supported women with free legal aid and her own personal interventions, in ways never since matched. The practice of submitting women’s disputes to mediation and arbitration survived through the seventeenth century, despite revolution, regicide, fire and plague. A tailpiece tells how a dispute concerning the will of Temperance Flowerdew, one of the earliest European settlers in the ‘New World’, was resolved by the English Privy Council. A chapter on the 18th century emphasises the English Government’s encouragement of mediation and arbitration, ending with how Mary Musgrove’s mediation helped to establish the colony of Georgia, and two sections on France, one pre-Revolution, one Revolutionary. They challenge others to explore developments in the colonies and France. The Conclusion widens that challenge.

Lady Anne Clifford, a woman of infinite strength of will, has demanded the last word. She simply refused a royal command to submit to an arbitration which would have robbed her of the vast landholdings she held in her own right.

The Women’s History Press and The Arbitration Press