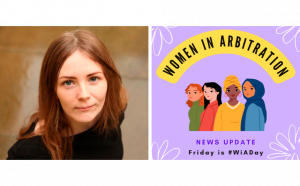 Over the last four months, ArbitralWomen Advisory Council Member Amanda Lee has shared news about the achievements, promotions, and career developments of hundreds of women in arbitration, including many members of ArbitralWomen, every Friday as part of a new weekly initiative known as “Women in Arbitration Day” or “WiA Day”.

Every week, Amanda prepares and shares a brief news digest on her LinkedIn feed highlighting the successes of women in arbitration of all levels of seniority and encourages those who see the posts on social media to celebrate the success of their female colleagues. The goal of the initiative is to showcase the impressive range of women in arbitration across the globe, demonstrate their diversity, and raise awareness about their careers, achievements, and experience.

By sharing information about talented women in arbitration as widely as possible, WiA Day promotes and celebrates women in a concrete and practical way. The more we know about women in this field, the easier it becomes to identify qualified arbitrators and other neutrals, experts, speakers, and more.

To date, the career developments, and professional achievements of more than 300 women have been highlighted, with those recognized hailing from across the globe and spanning Africa, Asia, Australia/Oceania, Europe, North America, and South America. The achievements of the most junior members of the arbitration community are celebrated alongside those of their more senior peers.

The range of women featured to date is broad, with those celebrated ranging from a talented all-female Vis Moot team hailing from Iran, to Her late Majesty Queen Elizabeth II, in whose name an arbitral award dated 9 December 1966 was notably made in the Argentine-Chile Frontier Case.

Follow Amanda Lee and the hashtags #womeninarbitration and #WiADay to enjoy the weekly news digests. Help to spread the word about the achievements of women in arbitration by reacting to and commenting on the posts.