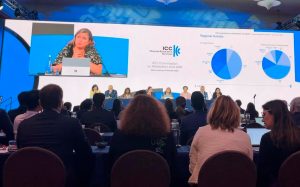 Delegates of ICC National Committees now include 36% women, compared to 30% initially. Of the new appointees, 42% were women. 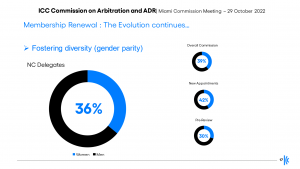 At the presentation of the renewed Commission in Miami, Florida on 29 October 2022, Commission Secretary Dr. Hélène van Lith said: “After many months of extensive efforts with our 90+ National Committees, today our renewed membership reflects a better geographical representation with the inclusion of Delegates from emerging jurisdictions and important progress has been made towards gender diversity, professional diversity and corporate engagement. We are fortunate that some of the finest legal minds active in international dispute resolution have joined the Steering Committee as new Vice Chairs, which will ensure that the Commission is ready for its next century”.

The ICC Commission is comprised of in-house counsel, corporate representatives, academics, practicing lawyers, arbitrators, and mediators.  Its mission is to gather expertise on arbitration and ADR across the ICC network to enable thought leadership, in line with the strategic objectives of ICC Dispute Resolution Services.  In fulfilling its mission, the Commission produces reports and recommendations to foster understanding and raise awareness of practical, procedural and legal issues in international arbitration and ADR.  The Commission provides input on proposed modifications of dispute resolution rules applied in ICC DRS.  The Commission’s work and initiatives are usually undertaken by specific Task Forces or Working Groups.

Submitted by ArbitralWomen News Director Cherine Foty with thanks to Dr. Hélène van Lith for the statistical and membership information