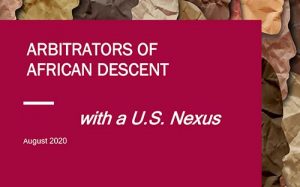 The New List: Arbitrators of African Descent with a U.S. Nexus

Thevenin and Simpson began their work in February 2020 and initially published The New List in June 2020. In August 2020, Thevenin and Simpson published the first update of The New List, which now contains bios, websites, and contact information for several arbitration professionals of African descent. The New List was compiled based on peer recommendations and referrals from attorneys, institutions, and associations. Thevenin and Simpson are grateful for the advice and assistance of Professor Ben Davis at the University of Toledo and 2018 recipient of the ArbitralWomen Champion of Change Award; Professor Adrien Wing of the BASIL and the University of Iowa; independent arbitrator Brent Clinkscale; Atlanta-based lawyer and President of the National Bar Association Tricia “CK” Hoffler; and the American Bar Association’s minorities committee, among others.

The New List contains 123 potential appointees or hires of African descent and as Katherine Simpson comments, “this alleviates the all-too-frequent lament, the same as inspired the ArbitralWomen Member Directory, that ‘we would hire and appoint, if only we had a list of people to choose from.’” Throughout, the New List has been intended to enable individuals and organizations — whether law firms, institutions, or disputing parties — to find and contact “just the right person” for every role, be that as arbitrator, speaker, expert, counsel, mediator, or even new hire — whether as a lateral or as a newly qualified professional.

Tafadzwa Pasipanodya, a US-Zimbabwean partner at Foley Hoag and chair of the firm’s Africa practice group, commented: “Katherine and Nancy deserve high praise for developing this list. Just as the arbitration world is coming to grips with its severe racial diversity deficit, Katherine and Nancy have provided an extraordinary service for those seeking to identify arbitration practitioners of African descent who are ready to be included in tribunal panels, counsel teams, and administrative institutions.”

“It is easy for all of us to pay lip-service to ideals of inclusion and equity, but by putting together this list of highly-qualified arbitrators, Katherine Simpson and Nancy M. Thevenin have done something concrete to promote those ideals in our community,” commented John Fellas, an independent arbitrator at Fellas Arbitration and former co-chair of the International Arbitration practice at Hughes Hubbard & Reed. “They should be commended for producing a resource that all participants in the field of international arbitration – be they clients, law firms, institutions or arbitrators – can and should consult to ensure a more diverse pool of potential arbitrators.”

“I am so honoured to be on this comprehensive list of arbitration practitioners of African descent, and particularly with such talented women, as part of an initiative spearheaded by women,” commented ArbitralWomen member Mélida Hodgson, head of Jenner & Block’s international arbitration practice in New York and Vice Chair of the ICC Institute of World Business Law.

The New List is showing itself to be an important tool to move the arbitration community towards greater inclusivity.  Since its publication, the International Institute for Conflict Prevention and Resolution (“CPR”) has invited from the New List, among others, ArbitralWomen members Vivian Zimba and Eunice Shang-Simpson to join CPR’s Panel of Distinguished Neutrals. “There have been a number of perceived obstacles to selecting people of color as neutrals in arbitrations. The New List takes aim at one of those, and provides ready access to talented arbitrators to better ensure that all available talent is being deployed in service of dispute resolution.  As noted, at CPR we have invited a number of the neutrals on the New List to join CPR’s Panel of Distinguished Neutrals,” observed Allen Waxman, President & CEO of CPR.

“The list is highly commendable… because it highlights the assertion that there are satisfactory numbers of qualified arbitrators of African descent within the arbitration space”, commented Ijeoma Ononogbu, a London-based solicitor, founder of ADR consultancy Dispute Resolver, and co-chair of the Africa Interest Group at the America Society of International Law. “Arbitrators who continuously raise the bar both within the African continent and in other jurisdictions, especially America, and have chosen to define their career destination intentionally.”

ArbitralWomen Board Member Rose Rameau, Founding Partner of RAMEAU INTERNATIONAL LAW in Washington D.C. and recent nominee to the Permanent Court of Arbitration in the Hague, commented: “Publishing a list of black arbitrators provides needed visibility. It scratches the surface of actions required to resolve the conscious and unconscious biases in the field of international arbitration. There are highly qualified, hard-working, brilliant black arbitrators and arbitration lawyers: this List proves we are here, now hire us. Appoint us.”

“In the nearly 40 years I have been in this field, there has never been a problem of talented people of African descent being unavailable. There has been a problem of them being hired and promoted in the large international arbitration practice groups and institutions or named as arbitrators by parties and institutions,” commented Professor Ben Davis. “And the reasons for that have nothing to do with their ability and everything to do with too many people’s inability to get past their ethnocentrism in an arena that, without irony, is based on a person’s capacity to do cultural gymnastics.”

One of the key benefits of international arbitration is its promise and proven ability to enable different people from different countries and different systems, with different backgrounds, to resolve disputes and even create harmony. It is indeed odd that gender parity and ethnic equity are not already reflected in arbitrator rosters.

“There is growing recognition that in order to maintain trust in the process and its outcomes, the decision-makers in our multi-cultural, multi-state international arbitration system of dispute resolution must reflect its users,” said ArbitralWomen member Edna Sussman, who serves as the chair of the New York International Arbitration Center (NYIAC) and as a director of the AAA/ICDR. “This New List is a signally important contribution to the broad effort that is being made by the arbitration community to increase diversity not only as a matter of fundamental fairness but also in order to a maintain and even foster greater acceptance of arbitration as a dispute resolution mechanism of choice.”

“The New List demonstrates that there is no shortage of highly qualified, talented people of African descent in the international dispute resolution space. It also facilitates the demand for greater diversity in this area of practice, which is entirely within reach” commented ArbitralWomen member Eunice Shang-Simpson. “The New List is also a helpful reminder to reflect on the progress we have made towards diversity within our respective institutions, and of the potential for going further. Inclusion on rosters or panels is important but increasing participation through direct appointments is key.”

Prof. Homer C. La Rue of Howard University, states “I think that one of the most important challenges facing the ADR community is that of making diversity meaningful by taking steps to select diverse neutrals (particularly persons of color and women) as arbitrators and mediators.” Prof. La Rue is currently Vice President of the National Academy of Arbitrators (“NAA”). He has created the Ray Corollary Initiative, which is a program to address unconscious bias in the selection of arbitrators and mediators and which aims for both gender and ethnic diversity in arbitrator appointments.

Nancy M. Thevenin, also a founding member of ArbitralWomen, highlighted that the New List “allows an overlooked group to be seen and for those on the list to see each other”.  Although the New List is not an organization and does not replace the important work that organizations do to promote diversity, community is developing within.

ArbitralWomen member Tina Patterson Principal at Jade Solutions, LLC stated, “It was heart-warming to attend the first getting-to-know-you webinar for individuals featured in the Arbitrators of African Descent with a U.S. Nexus List, and to see arbitrators from around the world present. The New List has been a fantastic resource to identify potential collaborators, speakers, and teaming partners for projects.”

“I fully support this project and its identification of highly qualified ADR Professionals of African Descent! This project espouses truth and debunks a falsehood. Its existence is a source of wise guidance and sage advice, and no doubt encourages others to do more of what is good and positive, and less of what is hurtful, harmful and divisive,”  said  James R. Jenkins, Chairman of the AAA-ICDR Foundation Board, speaking on his own behalf. “ADR Professionals of African Descent have a distinct perspective and grasp of the interpersonal, which is in part influenced by the fact that they are surviving and often thriving in a world flawed by proponents of primitive tribalism, cult, single issue orientation, political affiliation, bias, prejudice or default opinion based on race, and unequal access to justice and opportunity. This important perspective is embodied in dispute resolution processes where People of African Descent preside. Inclusion of People of African Descent will enable ADR to live up to its promise of neutrality, care, empathy and compassion, in action.”