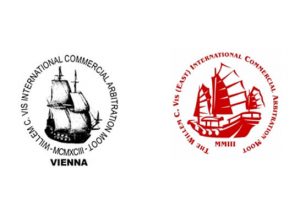 By Karen Mills, Board member

Each year ArbitralWomen provides support for a number of teams competing in the Vis and Vis East Moot competitions, in Vienna and Hong Kong, respectively, by covering the registration fees for such competitions. Teams may apply if they are constituted of at least half female participants, and the awards are given to those applicants with the greatest need, normally teams from developing countries that do not have sufficient funding or resources.

The Vis competitions provide law students with an invaluable opportunity, effectively to handle a major international commercial arbitration, from pleadings to argument, invariably involving tricky issues, both procedural and substantive. The students who are chosen by their Universities to compete work very hard, over long hours, on top of their normal curriculum. Many of our members assist as coaches in their jurisdiction, and/or sit as arbitrators in the competitions, and are always impressed by the quality of these students’ work and performance. Hundreds of teams compete in both competitions. Originally the competition was held only in Vienna, but 13 years ago one of ArbitralWomen’s founders, Louise Barrington, initiated, and continues to administer, a second Vis, the Vis East, in Hong Kong, to make it easier for Asian teams to attend. The success of the Vis competitions is such that teams from all over the world now compete in both Vienna and Hong Kong every year.

While in the first few years we were able to fund only a few teams, in the past two years we have received some support from law firms, other organisations as well as individuals which has allowed us to assist more teams. Another innovation in the past two years is the “President’s Award”, which is sponsored by our President, Rashda Rana, for an all-female team. Last year the President’s Award went to University of Indonesia’s all-women team, competing in Vienna, which scored extremely well both for the team itself and some of its oralists. This year the President’s Award was given to Gujarat National Law University, who will also compete in Vienna. Rashda, together with Karen Mills, have administered these awards each year, this year with the assistance of Bronwyn Lincoln as well.

The recipients, and sponsors, this year were:

And for Vienna’s Vis:

4. Kyoto University’s Vienna team, award sponsored by FTI Consulting (thanks to James Nicholson);
5 & 6. Two awards were sponsored by Perkins Coie (thanks to Paul Cohen): Washington University School of Law (in honour of the late Arthur Marriott), and University of Costa Rica; and

We wish, once again, to thank the sponsors for their very kind assistance, which has made it possible for these teams to participate.

We look forward to hearing good reports of our sponsored teams, and hope that more international law firms will consider participating in this highly valuable program by helping ArbitralWomen sponsor more teams in the future.