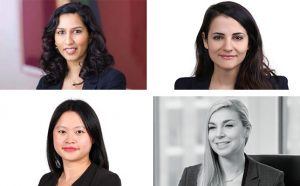 Saadia Bhatty, a member of the ArbitralWomen Marketing Committee, has been appointed to the CPR’s Young Attorneys in Dispute Resolution (Y-ADR) Steering Committee. Based in London, Saadia is counsel in the international dispute resolution team at Gide Loyrette Nouel and advises and represents states and private entities in international commercial and investment arbitrations (both institutional and ad hoc). Saadia is admitted to the Bars of Paris and New York. She currently serves as President of the London Chapter of the Harvard Women in Defense, Diplomacy and Development group and is a member of the international advisory board to the Young Arbitration Group of Pakistan’s CIICA, the advisory board of the European Federation for Investment Law and Arbitration, and the Board of Governors of the Pakistan Centre for Law and Society.

Antonia Birt is a senior associate in the International Arbitration Group at Freshfields Bruckhaus Deringer and acts as counsel and advocate in commercial and construction arbitrations. Antonia’s practice focusses on advising state, national and multi-national clients with a focus on energy, oil and gas, infrastructure, engineering and distribution. Antonia has acted under the key arbitral rules, including the ICC, LCIA, DIFC-LCIA, DIAC and UNCITRAL Rules. She also sits as arbitrator. Based in Dubai for nearly a decade, Antonia is admitted as a Solicitor of England and Wales and speaks English, German and Russian.

Elizabeth Chan has been appointed to the CPR’s Young Attorneys in Dispute Resolution (Y-ADR) Steering Committee. Based in London, Elizabeth is an associate at Three Crowns LLP. She specialises in international commercial arbitration and international investment arbitration, with particular focus on the oil and gas industry and Asia. Elizabeth is admitted in New Zealand and New York, speaks three languages, and is a Visiting Faculty Member at LSE and a Teaching Associate at Queen Mary University of London.

Gretta Walters has been appointed to the CPR’s Young Attorneys in Dispute Resolution (Y-ADR) Steering Committee. Based in New York, Gretta is counsel at Chaffetz Lindsey LLP and represents individual and corporate clients in commercial and investment disputes in domestic and international arbitration and state and federal courts. She is admitted to the New York Bar, is an adjunct professor at NYU School of Law and serves as Secretary of the International Commercial Disputes Committee of the New York City Bar.