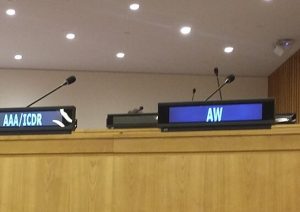 The 64th session of UNCITRAL Working Group II (Arbitration and Conciliation) was held in New York from 1 to 5 February 2016.

The session was attended by 56 states (38 members of the Working Group’s Commission and 17 observers), observers from the Holy See and the European Union, one intergovernmental organization and 36 non-governmental organizations, in total some 210 persons. ArbitralWomen, represented by Dr. Ileana Smeureanu, participated for the first time since its accreditation.

The first part of the session finalized the discussions on the revision of the 1996 UNCITRAL Notes on Organizing Arbitral Proceedings under the presidency of Mr. Michael Schneider, an arbitration specialist from Lalive, Geneva. The second part of the session, dedicated to the enforcement of international commercial settlement agreements resulting from conciliation, was chaired by Ms. Natalie Yu-Lin Morris-Sharma, Deputy Senior State Counsel, Attorney-General’s Chambers in Singapore.

During the second part of the session, the Working Group discussed the following topics:

The full Report Working Group II (Arbitration and Conciliation) on the work of its sixty-fourth session is available for consultation at the following link: https://documents-dds-ny.un.org/doc/UNDOC/GEN/V16/008/00/PDF/V1600800.pdf?OpenElement