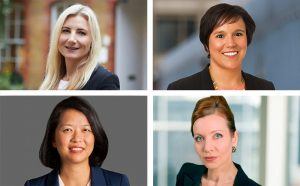 Paula Hodges QC Takes Over as LCIA President, Karyl Nairn QC is appointed as A Vice-President and Three Other ArbitralWomen Members Are Appointed to the LCIA Court

On 15 May 2019, the LCIA announced the election of eleven new members of the LCIA Court, including three ArbitralWomen members, Anneliese Day QC, Ank Santens and May Tai. In addition, Paula Hodges QC has stepped into the role of President of the Court, and Karyl Nairn QC has been promoted to a Vice President of the Court.

Anneliese Day QC of Fountain Court Chambers has been appointed as a member of the LCIA Court with effect from May 2019. Anneliese acts as lead counsel and arbitrator in respect of commercial, energy, construction, investment treaty, insurance and professional negligence disputes in both a national and international context. Anneliese speaks English, French and Spanish and is recommended by Chambers & Partners and the Legal 500 in London, the Middle East and Asia Pacific. She was named as Construction Barrister of the Year at the Chambers & Partners Bar Awards 2018, Construction and Energy Silk of the Year 2018 at the Legal 500 UK Awards, Barrister of the Year 2014 by The Lawyer and selected as one of the 500 most influential people in the UK by Debretts in 2015.

Ank Santens, a partner at White & Case LLP, has been appointed as a member of the LCIA Court with effect from May 2019. Ank is based in New York and acts as counsel and arbitrator in commercial, investment and construction arbitrations. Ank is admitted in New York and as a solicitor in England and Wales. She is a member of the Board of CPR and Delos Dispute Resolution, and a member of the Executive Committee of the Foundation for International Arbitration Advocacy (FIAA) and the Institute for Transnational Arbitration (ITA).

May Tai, managing partner at Herbert Smith Freehills’ Greater China Practice, has been appointed as a member of the LCIA Court with effect from May 2019. May is based in Hong Kong and specialises in cross-border China-related and regional Asian disputes and contentious regulatory matters. May is qualified as a solicitor of England and Wales and Hong Kong and speaks Bahasa (Malaysian and Indonesian), Chinese (Mandarin and Cantonese) and English.

Karyl Nairn QC, a partner and global co-head of the International Litigation and Arbitration Group at Skadden, has been appointed as a Vice President of the LCIA Court with effect from 13 May 2019. Karyl acts as arbitrator and counsel in complex international commercial and investment treaty arbitrations, across a variety of sectors. Karyl is recognised as a leader in her field by the Chambers Guide, the Legal 500 and Who’s Who.