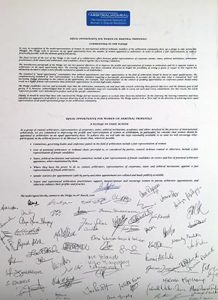 Launch and Signature of the pledge on Equal Representation in Arbitration

The launch and signature of the Equal Representation in Arbitration (ERA) pledge on 18 May 2016 in London marked a historic moment in international arbitration. The Pledge has already been signed by over five hundred individuals and around 70 organisations.

What is the Pledge?

The Pledge has been actively supported by ArbitralWomen since its conception. Actively championed by ArbitralWomen, we were also privileged to have three members of the ArbitralWomen board (Lucy Greenwood of Norton Rose Fulbright, Gabrielle Nater-Bass of Homburg AG, and Mirèze Phillipe, Special Counsel at the ICC) on the steering committee for the Pledge. On the occasion of the launch of the Pledge, Rashda Rana, President of ArbitralWomen, commented to Global Arbitration Review

“(w)ith the Pledge, the arbitration community has moved beyond merely acknowledging the problem and articulating intent to do something about it. There is increasing recognition that the pace of change is unacceptable […] not just in the world of arbitration [but] in the judiciary and on corporate boards”.

To add symbolism to the moment, ArbitralWomen’s Board signed a hardcopy version of the Pledge at its second International Women’s day at UNESCO in Paris on 16 March 2016, and invited everyone there to sign it too, which they did.

One of the steps recommended by the Pledge is monitoring and publication of gender statistics for appointments of women arbitrators. Lucy Greenwood has been advocating for several years for transparency in relation to this information and collated statistics from all the major international arbitration institutions in advance of the launch of the Pledge in order to establish a baseline from which progress can be monitored.

ArbitralWomen strongly encourages all its members and supporters to visit www.arbitrationpledge.com to sign the Pledge electronically and show their support for this important initiative.