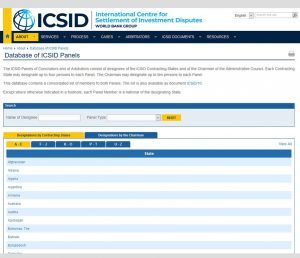 Of these 60 individuals, only 15 are women. Of these 15 women, five were nominated by France and three were nominated by Germany. Botswana, New Zealand, and Finland each made two female designations. Other Member States which made nominations in 2019, including Denmark, Honduras, Republic of Korea, and Portugal, made no female designations at all.

Such Member States are unfortunately not alone in their lack of gender diversity. The ICSID Panels are currently comprised of 680 individuals designated by 125 Member States, but only 132 individuals, or, 19% are women. This includes a remarkable 51 Member States which have made all male designations. Crucially, of the Member States which have designated the maximum number of Panel members (four for each Panel under Article 13(1) of the ICSID Convention although a person may serve on both Panels under Article 16(1) of the ICSID Convention), the following Member States’ Panel members are currently all male: Afghanistan, Austria, Barbados, Chile, Cyprus, Egypt, Japan, Republic of Korea, Luxembourg, Malaysia, Mali, Mauritius, Morocco, Paraguay, Portugal, Romania, Saudi Arabia, Singapore, and the UAE.

These realities reflect a continued struggle in the fight for gender parity in international arbitration despite the notable strides made towards equality in recent years within the ICSID framework. These figures must also serve as a reminder of the universality of the problem and the universality of efforts to correct it. Gender imbalance is not localized to a particular region and at the same time, gender parity in designations to the ICSID Panels is being achieved by Member States in all corners of the world.

Encouragingly, the 26 designations made by several Member States in the first couple of months of 2020, which also appear in the updated list, reflect that 12, i.e. almost half, are women. Four of Spain’s seven designations are women.

Gender parity in the ICSID Panels may also have the added benefit of influencing the parties towards greater gender parity when appointing Arbitrators or Conciliators as (i) Member States having designated women on the ICSID Panels may be more inclined to appoint women in their capacity as respondents, and also because (ii) both claimants and respondents and their counsel may in practice consult the ICSID Panels in their own decision-making process, something which ICSID has indicated that parties are “welcome to do.”

Notwithstanding the above, gender parity on ICSID Panels, while necessary, remains just one piece of the diversity puzzle. The legitimacy of the ISDS system as a whole depends also on increasing diversity in other aspects of Arbitrator and Conciliator profiles such as national origin, professional background, race, and religion.