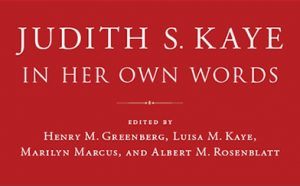 Judith S. Kaye in Her Own Words: Reflections on Life and the Law, with Selected Judicial Opinions and Articles 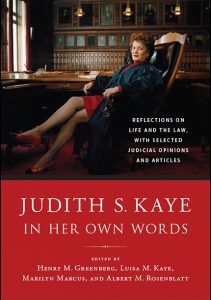 Judith S. Kaye in Her Own Words: Reflections on Life and the Law, with Selected Judicial Opinions and Articles, celebrates Judith Kaye’s successful career as a seasoned advocate and the first woman Chief Judge of the New York Court of Appeals. The book covers various periods of Judge Kaye’s life, concluding with opinions, articles, and speeches.

Judge Kaye was highly respected and dearly loved by her colleagues and the New York legal community. She was an ardent leader, modernizing the practice of law with an eagle eye on efficiency. She selected specialized, thoughtful platforms to launch key initiatives in New York, including for women and children.

Of crucial importance to the arbitration community, Judge Kaye launched the New York International Arbitration Center (NYIAC), inspired by her belief that New York should have a dedicated space for arbitration hearings seated in New York as well as a centralized venue for arbitration practitioners, academics and arbitrators to exchange and develop thought leadership in arbitration and capitalize on New York’s role at the epicentre of trade, commerce, and law. Judge Kaye was the founding Chair of NYIAC’s Board of Directors. During her tenure as Chair, she promulgated best practices and invited the arbitration community to think critically about arbitration jurisprudence. “Judge Kaye was an inspiration and had a unique way of making each of us feel special. She was tenacious in pursuing her objectives while succeeding in accomplishing them with the utmost grace,” commented Edna Sussman, Chair of NYIAC’s Board of Directors. “We were fortunate to have her choose international arbitration in New York as one of her two missions after her mandatory retirement from the bench, along with improving the lives of children.”

The book offers pathways to Judge Kaye’s life and work, including her resilience and warmth. “Judge Kaye was a larger-than-life figure who inspired her audience no matter the size with a unique mix of tenacity, kindness, and humour,” noted Rekha Rangachari, Executive Director of NYIAC. “It is an honour to work in the space Judge Kaye created, advancing her goals for New York as a pivotal player in the international arbitration landscape.”