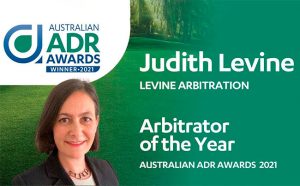 Judith Levine won the Award for the 2021 Arbitrator of the Year at the Australian Disputes Centre annual ADR Awards dinner on 31 March 2022. The award recognises superior performance as an Arbitrator in domestic and/or international disputes. Since establishing her independent arbitrator practice in 2020, Judith has sat as presiding arbitrator, co-arbitrator and sole arbitrator in dozens of disputes under the ICC, SIAC, HKIAC, KCAB, PCA/UNCITRAL, ACICA and CAS rules. Judith also sits on state and federal government tribunals in Australia, and serves as Vice-President of the Australian Centre for International Commercial Arbitration. She has published and presented widely on cutting edge topics of international dispute resolution, including climate law, arbitrator ethics and default of appearance in international adjudication.