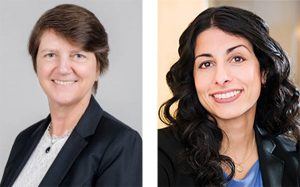 Judith Gill QC and Catherine Amirfar have been appointed to the Governing Board of ICCA, together with an additional three new Governing Board Members. The five new members will replace the five outgoing members who are retiring from the ICCA Governing Board in 2019. They will take office for an initial four-year term.

Judith practices as an independent arbitrator based at 20 Essex Street Chambers in Singapore, and is the first female President of the LCIA. She has extensive experience acting as arbitrator in respect of matters involving construction and infrastructure disputes, energy contracts, corporate acquisitions, manufacturing, distributorship agreements and other commercial and investment agreements. Prior to joining 20 Essex Street, Judith was a partner in the International Arbitration Group of Allen & Overy for more than 25 years and was Head of the Group for 11 years. Judith is recognised for her expertise in international arbitration by all the leading directories