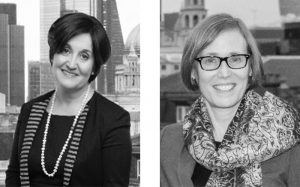 Jane Player has joined Int-Arb Mediators, based at the International Arbitration Centre, London, with effect from 28 January 2020. Jane is a leading international mediator with particular focus on corporate and contractual claims, fraud and project disputes, including pharmaceuticals, energy, technology, IP and media disputes. Prior to becoming a full time mediator she was a partner in the London Disputes Group at King & Spalding LLP, having previously held leadership roles in the disputes teams at Bird & Bird and DLA Piper LLP. She is a Distinguished Fellow to the International Academy of Mediators and a past winner of Corporate Livewire Commercial Mediator of the Year – UK. She is recognised for her expertise by Chambers and the Legal 500.

Janet Walker has joined Int-Arb Arbitrators, based at the International Arbitration Centre, London, with effect from 28 January 2020. In addition, Janet has chambers at Arbitration Place, Toronto, and Sydney Arbitration Chambers, Australia. She sits as sole, presiding and co-arbitrator under all major arbitral rules. She is a professor of law and past associate dean of Osgoode Hall Law School and Vice Chair of ICC Canada. A member of the CIArb Canada Board, she received the CIArb Canada Award for distinguished services to arbitration in 2018. Janet has been regularly recognised by Who’s Who Legal Canada, Who’s Who Arbitration and Chambers & Partners for her expertise as an arbitrator since 2010.