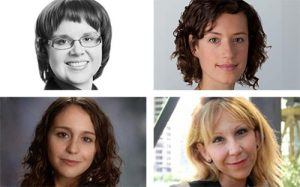 Marina Akchurina has been appointed as an ICC YAF Representative for Europe and Russia. Marina is an associate at Cleary Gottlieb, Moscow. Marina’s practice includes litigation and arbitration, with a particular focus on international disputes, including those involving states and state-owned entities. Marina is admitted to practice in Russia and is a member of New York Bar. She speaks English and Russian. Marina is a Fellow of the Chartered Institute of Arbitrators and Co-Chair of RAA40.

Naomi Briercliffe has been appointed as an ICC YAF Representative for Europe and Russia. Naomi is a senior associate in the international arbitration group of Allen & Overy LLP, based in London. Naomi’s practice includes international commercial and investor-state arbitrations; she has also advised clients in respect of state to state disputes. Naomi is admitted as a Solicitor-Advocate (England and Wales) and a Foreign Registered Attorney (New York). Naomi is recognised for her expertise by Who’s Who Arbitration, Chambers and Legal 500.

Meredith Craven has been appointed as an ICC YAF Representative for North America. Meredith is an associate at Chaffetz Lindsey LLP, New York. Meredith represents clients in a broad range of international arbitration matters, including both commercial and investor-state disputes. Meredith is admitted to the Bars of New York State and the Southern District of New York and is a member of the New York City Bar Association Arbitration Committee.

Verónica Sandler Obregón has been appointed as an ICC YAF Representative for Latin America. Verónica is a Director of Bellavision Entertainment S.A., an international media producer, and Adjunct Professor at the University of Buenos Aires (UBA) and other institutions. Verónica has acted as arbitrator, party counsel, and secretary in commercial and investment arbitrations, before international institutions including the ICC and ICSID, and domestic institutions under the auspices of the Bolsa de Comercio de Buenos Aires (BA Stock Exchange) and the CEMA (Centro Empresarial de Mediación y Arbitraje). She is regularly invited to speak at conferences and seminars. She is the author of several publications in English and Spanish.