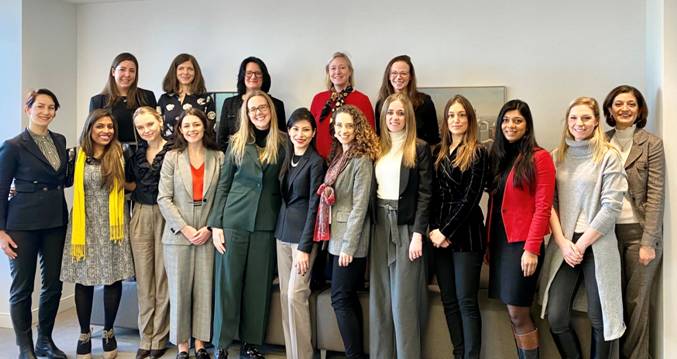 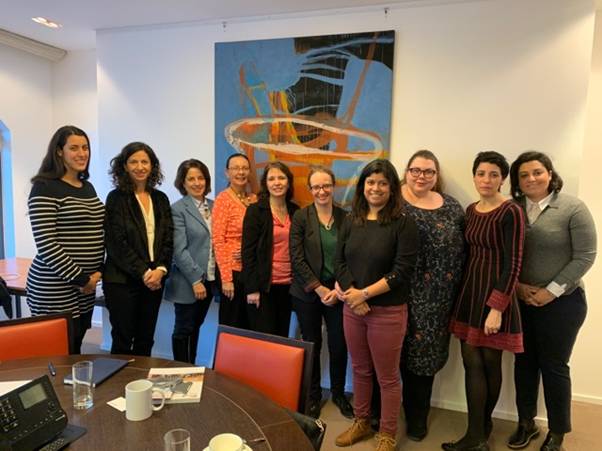 The ArbitralWomen Annual General Meeting (AGM) took place on 17 January 2020.  Members participated telephonically from around the world, and, in some cities gathered in person.  ArbitralWomen is grateful to our Members at several firms who graciously offered to host the in-person gathering of local members in Geneva at King & Spalding, in London at NERA Economic Consulting, in New York at Chaffetz Lindsey and in Paris at Freshfields.

Maria Beatriz Burghetto, who has joined Erika Williams as co-Director of the Newsletter Committee, delivered the report on the committee’s work, noting that six Newsletters were published in 2019, with two special edition Newsletters – one on the 2018 Jubilee Celebrations and the other on the 2019 Vienna AGM and Vis Moot.  She explained that the other Newsletters typically included an interview with a leading female practitioner or arbitrator, reports on events submitted by Members, and a section on “diversity initiatives in the workplace.”

Marily Paralika delivered the Events Committee report, noting that Vanina Sucharitkul has joined her in coordinating the events work.  She noted that in 2019 there were 71 events, of which 28 were in Europe, 6 in South/Central America, 20 in North America, 1 in Africa and 16 in Asia/Oceania.  She also reported that in 2019 ArbitralWomen held events for the first time in Istanbul, Kiev, Kuala Lumpur and Guanxi, China. This was a record number of events.

Members were assured that all the committee reports, including reports from committees that did not present during the AGM, will be circulated to the Members together with the minutes of the AGM.

Following the committee reports, Dana MacGrath provided a high-level overview of the ArbitralWomen Board election process that will take place in May and June 2020. Members are eligible to run for the Board if they have been an ArbitralWomen Member for at least one year before the Call for Nominations. In the first week of May 2020, the Secretary shall issue a Call for Nominations for Election to the Board. Nominations shall be submitted within 15 days. Nominees shall submit an acceptance in writing with supporting materials within 7 days of nomination. Thereafter, the Secretary shall issue a Call for Votes that includes the list of eligible candidates. The election shall take place by secret ballot over a period of not more than 7 days. The Secretary shall announce to Members who has been elected to the Board at the earliest opportunity following the election, ideally in mid or late June 2020. It was assured that all these details and more would be set out in formal notices about the election closer to the date.

During the Q&A / Discussion period, several Members offered suggestions on how to reach out to in-house counsel to include them in ArbitralWomen membership.  Further brain-storming continued after the official close of the meeting at in-person venues. As a result, we have several potential new initiatives in the pipeline for 2020!