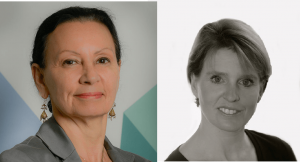 Mirèze Philippe (above left), co-founder of ArbitralWomen with Louise Barrington, and Special Counsel at the Secretariat of the International Court of Arbitration, International Chamber of Commerce (ICC), Paris, France, has been named together with Lucy Greenwood (above right), international arbitrator, as recipients of the International Institute for Conflict Prevention and Resolution (CPR) 2018 Awards for Outstanding Contributions to Diversity in ADR.

The International Institute for Conflict Prevention and Resolution (CPR), a global non-profit organization that advances dispute prevention and resolution practices and provides high quality solutions, announced the winners on February 15. Created 10 years ago, the CPR diversity award is the only award to recognize the work of practitioners who have undertaken initiatives towards change and towards achieving equality for all dispute resolution practitioners. Honorees to be recognized for their long-standing commitment to diversity and focus on data and transparency in addressing diversity in ADR, will be formally presented the Award at CPR’s Annual Meeting, taking place March 8-10, 2018, in Atlanta.

Congratulating Mirèze on her achievement, Alexis Mourre, President of the ICC Court said: “Mirèze’s personal conviction and tireless determination has been a driving force behind ICC’s strategic efforts to enhance the arbitration process through enhanced gender and cultural diversity. We are delighted her efforts are being recognized through this CPR Award.”

The CPR Award acknowledges Mirèze’s dedicated efforts to bring diversity to the foreground that date back over two decades to an era when debate and awareness around the issue was not commonplace. “Through perseverance, selflessness and a huge amount of work, Mirèze has succeeded not only in raising awareness of the diversity debate, but also in helping to address some of the challenges arising from it,” said ICC Court Secretary General Alex G. Fessas. “Through her work with the ICC Court and ArbitralWomen, Mirèze has made a significant contribution to narrow gender, generational and geographical gaps in our global community, sharing the fruits of her labour with anyone who wishes to contribute to the same cause. Congratulations Mirèze.”

Those nominating Mirèze noted her decades of work researching and publishing data about the lack of diversity in arbitrator appointments in international arbitration contributing to greater transparency and understanding around the issues.

Expressing gratitude to colleagues who had nominated her, Mirèze said: “The CPR Diversity Award I am receiving is a triple honour”. “First, it is the only diversity award recognizing the work of practitioners who have undertaken initiatives towards change and towards achieving equality for all dispute resolution practitioners. CPR has been particularly active in the field of diversity and is the only dispute resolution organization that has promoted a Diversity Pledge on its website for several years. It is therefore extremely rewarding to receive the only award which exists in this field and which is reputed. Second, it is an honour to receive only the 6th CPR Diversity Award since this prestigious award was created ten years ago.” She added, “And third, while I have invested time, energy and efforts in the last twenty five years to promote women in dispute resolution and equality for equally qualified female practitioners, I never thought I would be officially recognized for this work; therefore, I am particularly grateful to those who have nominated me, namely Michael McIlwrath who has done so much for diversity, colleagues from ArbitralWomen and CPR member firms, and many other colleagues and friends — such as Louise Barrington, who was the initiator of ArbitralWomen before we founded ArbitralWomen together, and who received the CPR Award in 2010. We were lucky to have many wonderful practitioners rally around us and contribute to the success of ArbitralWomen.”

“This recognition is particularly welcome when I look back and see the change that occurred over the last twenty five years at ICC. The diversity efforts started at the Secretariat of the Court with Sigvard Jarvin, then General Counsel, Benjamin Davis, then Counsel and Eric Schwartz who was the Secretary General at that time. Sigvard has always encouraged female colleagues to get more involved in arbitration, Ben has relentlessly pleaded in favour of promoting female colleagues to higher positions and Eric is the person thanks to whom change started. He promoted in 1995 a female deputy counsel to counsel, the first ever, and supported deputy counsel in many ways. I also wish to pay tribute to another colleague at that time, Louise Barrington who dared raising her head and asking where are women in dispute resolution. Finally, in the recent years the management of the Court has been very supportive to women which is demonstrated by our statistics and the number of female Court members. Therefore I wish to share this Award with all colleagues who strived for change.”

An English national, Lucy Greenwood is dual-qualified in English and Texas law. She has practiced international arbitration for over twenty years, initially as an attorney with Linklaters LLP in London and Paris before joining Norton Rose Fulbright LLP in Houston in 2008. Those nominating her noted Ms. Greenwood’s long-standing efforts to gather and analyze extensive data, e.g., on the representation of women on international arbitration tribunals going back to 1993, used to monitor progress in the field of diversity. Nominating parties also cited several seminal articles on diversity published by Lucy. Lucy was also an ArbitralWomen Board member during 3 years.

“I am deeply honoured by this award and especially honoured to share it with Mirèze Philippe, a true trail-blazer who has worked tirelessly for 25 years to raise the profile of women in the field and with whom I have been privileged to work on the Board of ArbitralWomen and on the Pledge,” said Ms. Greenwood. She added, “In recent years real progress has been made in making our community more reflective of wider society but there is still much more to be done. As we look to the future our focus must be to broaden our approach and to address the lack of geographic and ethnic diversity in international arbitration, which is why the Alliance for Equality in Dispute Resolution was recently launched. The Alliance seeks to facilitate equality of opportunity for all, regardless of background, location, sex, ethnicity or age and will work with others to achieve these aims. Awards such as this CPR Diversity Award demonstrate the importance that is placed upon efforts to promote a more diverse and more inclusive international dispute resolution community. Receiving this Award reinforces my personal commitment to addressing these issues and I am very grateful for it.”

About CPR: Founded in 1979, The International Institute for Conflict Prevention & Resolution (CPR) is a New York based independent non-profit organization providing both administered and non-administered arbitration services. It has helped global businesses prevent and resolve commercial disputes effectively and efficiently for more than 40 years. Its membership consists of top corporations and law firms, academic and government institutions, and leading mediators and arbitrators around the world. CPR is unique as: (1) a thought leader, driving a global dispute resolution culture; (2) a developer of cutting edge tools and resources, powered by the collective innovation of its membership; and (3) an ADR provider offering innovative, practical arbitration rules, mediation and other dispute resolution procedures, and neutrals worldwide.

“CPR has long been committed to utilizing its very best efforts to foster diversity in dispute resolution in tangible ways, including putting diverse candidates on slates; reminding decision-makers of the benefits of diversity on the quality of the decision-making process; and, most important, actively encouraging the selection of those candidates,” said Noah J. Hanft, President and CEO of CPR. “Through this award, we seek to recognize and honor others who are deeply committed to achieving tangible gains in diversity in ADR, and have taken great strides towards doing so, and both Lucy and Mirèze squarely fit that bill.”

The press-releases were published on 15 February 2018 by CPR here and by ICC here https://iccwbo.org/media-wall/news-speeches/icc-special-counsel-named-recipient-prestigious-diversity-award/.