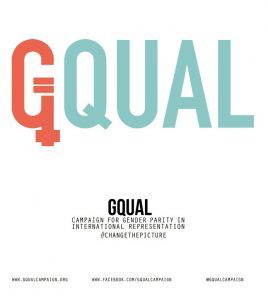 Changing the Picture of International Justice, GQUAL Conference at The Hague, 3-5 October 2017

Two years ago, GQUAL started as a global campaign for gender parity in international tribunals and monitoring bodies. The campaign was crafted as a response to the critical under-representation of women within these entities. GQUAL was launched on 17 September 2015 at UN Headquarters in New York and since then, GQUAL has become a leading platform advocating for gender parity in international justice. To celebrate its second anniversary GQUAL’s conference seeks to bring together a diverse group of people from all over the world to discuss and approve an Action Plan that will further build upon these strategies (Click here for the programme).

The event started with an opening ceremony on Tuesday 3 October in the magnificent Peace Palace and was attended by a hundred participants coming from around the world to discuss about human rights and gender parity. Two violinists played while people were making their way through the International Court of Justice room and also played between some of the presentations made.

The keynote speakers were the following: Viviana Krsticevic, Executive Director, Center for Justice and International Law (CEJIL) and GQUALBoard member; Ana Helena Chacon, Vice president of Costa Rica; Astrid Bronswijk, Head of International Affairs, municipality of The Hague; Silvia Fernandez de Gurmendi, President of the International Criminal Court; Theresia Degener, Chair person of the United Nations Committee on the rights of Persons with Disabilities (CRPD); Irene Khan, Director General, International Development Law Organization (IDLO); and Philippe Couvreur, Registrar of the International Court of Justice. All amazing people who delivered speeches related to their activities in the human rights field and initiatives about gender parity. I was truly touched by their generosity and the dedication they deploy in getting the message heard.

The first panel on October 4 introduced some of the most recent data on the current and historic under-representation of women among several core international justice entities, international arbitration, and the UN. This panel also showed aggregate information on the geographical representation of female vs. male candidates, correlations between international representation; and the political participation of women within the national level. The panel was moderated by Hector Olasolo, Chairperson of the Ibero-American Institute of The Hague for Peace, Human Rights and International Justice, Chair in International Law, El Rosario University (Colombia). All panelists presented numbers while addressing the audience on the topic they were requested to discuss. María Noel Leoni, Senior Lawyer at the Center for Justice and International Law (CEJIL) and member of the GQUAL Secretariat, presented a very clear picture about the gender situation in various international organizations. Liliana Ronconi, Program Coordinator, Center for Human Rights at the University of Buenos Aires (UBA), presented the situation in Latin America. Verónica Birga, Chief of the Women’s Human Rights and Gender Section, Office of the High Commissioner for Human Rights (OHCHR), spoke about unconscious bias and gender discrimination. Mirèze Philippe, Special Counsel ICC Court of Arbitration, ArbitralWomen Co-Founder, represented ICC and AW and shared information about the situation in the dispute resolution environment.

Mirèze said that GQUAL’s initiative is crucial. It is amazing to see that many people around the world are engaged in human rights and gender parity initiatives. I commend GQUAL for having put this conference together and gathered all these inspirational actors. Our actions are complementary. ArbitralWomen is militating for gender equality in dispute resolution, and GQUAL is militating for gender equality in all fields. The end result we are all seeking, no matter who starts the initiative, ArbitralWomen, GQUAL, the Equal Representation in Arbitration Pledge or any other organisation, is parity and offering men and women equal opportunities for equal qualifications. It is therefore important to cooperate.

Discussions on gender parity in the dispute resolution field have been very popular around the world, mainly these last two years. The trend is more successful than anyone could have anticipated. I consider this to be a victory and hope that the impact will be positive, because there remains much to be done to overcome under-representation. It is however saddening to note that in 2017 we must still raise the issue of under-representation of women in all environments, and even the dearth of women in a few fields and very often their absence in leading positions. The world keeps evolving every day, at a path that we are not able to follow, because every day brings a mountain of novelties. And yet, in 2017, we must still prove to the world that women, as much as men, are part of this world, of its governance, of its evolution, of its legal system. Despite making up over half the population, the contribution of women is far below its potential.

So, equality is a fundamental human rights issue, and human refers to men as well as to women. Equality is for the benefit of the entire society. The world needs to understand that, and needs to stop undermining the role of women. We need to use skills and talents where they are, irrespective of gender, age, ethnicity, religions, disabilities. Associations of women lawyers have been particularly active in this last decade and have regularly renewed their call for an increase of women in all legal fields. Insignificant progress was made.

A few numbers about female arbitrators, lawyers and ICC Court members were then shared. They demonstrate how small and how slow the change has been, although the situation is now changing at a faster path. Such numbers will soon be published in ICC Dispute Resolution Bulletin.

What has so far changed is thanks to the perseverance of those who militated for change. Also, thanks to technology and social media, it is no longer possible to silence people. Luckily we hear sometimes good news about women being nominated or reaching high positions. Is this progress? Yes because it is high time to use women’s talents. Yet, I ask whether progress needs to wait centuries before we see qualified women being offered the same opportunities as their equally qualified counterparts.

So the road is still long. What can we do to contribute to change? We all know that we must continue to raise awareness and spread the word, educate, make noise about unfair situations – the more we make noise the more we are heard – require accountability, transparency and statistics in order to measure progress.

Several panels and workshops followed. The two days ended with a signature ceremony of the Action Plan presented by GQUAL. It was an excellent conference with wonderful inspirational women. A lot to learn from each other…