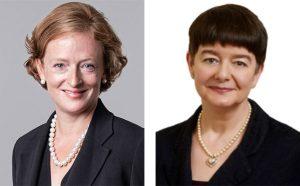 Ania Farren has been appointed as the first female Chair of the ICC UK Committee for Arbitration and ADR. Ania has served as Vice Chair since 2017, having joined the Committee in 2015. Ania currently works as Managing Director at Vannin Capital and is a member of Arbitrators at 10 Fleet Street, accepting appointments as an arbitrator. She has over 15 years’ experience as counsel specialising in international arbitration, both commercial and investment treaty, with a particular focus on energy related disputes. Ania is recognised for her arbitration expertise by Who’s Who Future Leaders and Chambers & Partners UK.

Kim Franklin QC has been appointed to the ICC UK Committee for Arbitration and ADR. Kim specialises in international arbitration, with particular focus on the resolution of disputes arising from complex construction, engineering and infrastructure projects. She acts as counsel in the UK Construction and Appeal Courts, including the Privy Council and in the Caribbean. Kim is a Chartered Arbitrator and Fellow of the Chartered Institute of Arbitrators, acting as party appointed arbitrator and Tribunal Chair, and is an accredited Construction Adjudicator. She has been recognised for her expertise by the Legal 500 and Chambers & Partners.